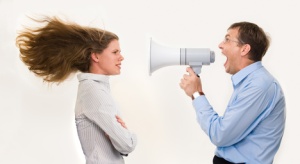 I was recently talking to a friend of mine.  She had just heard, second-hand, some pretty mean (and generally untrue) things about herself!

On the surface, the stuff sounded really harsh!  I felt such compassion for her!

Her immediate reaction was to defend the criticism with her version of the truth.

I listened as she explained to me all the unkind things she had heard about herself.

When she called me, she was MAD!  She called them all LIES!  TOTAL LIES!

As she started to calm down, she recounted each lie and then told me how some of those lies might have come about.

The more she talked, the more we both realized that there actually was a little bit of truth in each thing she’d heard.

The problem was that the little bit of truth had been heavily embellished with “always” and “never” statements.  And each half-truth had its own untold back story.

As she found a tiny bit more truth in each statement that she had initially defended vigorously, and as the anger started to melt even more, it gave way to self-doubt.  She started to doubt herself in big ways.  And she started to say things, kind of to convince both of us, like “I’m NOT a bad mother!” and “I’m NOT a bad wife”!

She was VERY concerned about what others thought of her who may have heard the same lies.

She felt like she had this stamp on her forehead defining her as a bad mother and a bad wife even though much of what was said was only half of the story, at best.

I found something come out of my mouth at that moment that I must have gotten from a pastor or some speaker somewhere because I don’t recall ever saying it or thinking it myself – but I liked it!

I said, “Friend, don’t let this define you.  Let it refine you.”

I told her she was right.  She is NOT a bad mother NOR a bad wife.  And that she definitely had every right to be hurt and angry.  For a time.

BUT, I also felt that she had been blessed with the information!  It was information that had never been shared with her directly and that she might have NEVER known!  And it was VALUABLE information despite the harsh and over-exaggerated way that it had been delivered to her.

The fact was that this was someone else’s PERCEPTION.  And while the facts may not have been totally true from a “never” and “always” and “you-don’t-have-the-whole-picture” standpoint , perceptions are very true to the person perceiving them!

I told her that she would be missing a HUGE opportunity if she didn’t allow SOME of what was said to REFINE her!

By the end of the conversation, she was still angry.

But she saw that there was definitely a reason that God had brought this information to her – and that she had to look at it as an opportunity to grow.

I had a controlling person once get in to a heated argument with me about how controlling I am!  It was a friend.  And she was mad at me for suggesting that a table could be put “here” instead of “there” at a school outreach function.

She said some really ugly words to me like “nobody likes you” and “you need to stop telling people what to do or they are going to quit” (I was in a VOLUNTEER leadership position at a Christian School – you know the kind right? :)).  She even brought up a personal thing I was dealing with and said I was getting “too involved” there too.

Man, the words stung!  I was really, really mad at her at first.

Then I calmed down and sent her an apology.  For my part.

But I realized a lot of things from that interaction.   At that point in my walk, thank God,  I was mature enough to know that I had to get some lesson from the interaction.

I wasn’t going to consider myself a “failure” and quit my “job” (tempting as it was :)) or define myself as a “bad leader” because I suggested a table be moved at an outreach function.

So, once the pain subsided and the tears dried up, this is what I walked away with:

First is that I struggle with control 🙂  There, I’ve said it.  Considering that I used to be a “Corporate Controller” for about 10 years, I should have already known that – I came by it rather naturally – but this woman cemented the awareness part for me!  In corporate america or when you’re trying to lead the PTA, it has its definite pluses.  In most other relationships, it can be a problem!

Not long after that interaction, I realized that control was not only eroding my relationship with God, but it was eroding my most important earthly relationship – the one with my husband.  So maybe I owe this woman more than an apology – maybe I owe her a thank you for the wake up call!

Second is that others tend to criticize, in others,  the very things that they don’t like about themselves.   So I started to be more aware of that character trait in myself – because I’m the only one I have any control over (hmmm… there’s that word again).

Third is that you need to set boundaries in your life around certain people.  It’s one thing to turn the other cheek.  It’s quite another thing to keep making your face available for the smackings.

Lastly, hurt people hurt people.  It took me longest to learn this last one.  And I think it’s most of what my friend above was experiencing too.  Sometimes people have to make you feel small to make themselves feel bigger because they feel so small to begin with.  I’ve learned to have a healthy compassion for people who are struggling with this instead of spending all of my time whining about the wounds that they’ve inflicted on me from their place of brokenness.

The next time you hear something about yourself that has you immediately in defense or offense mode, take a step back and remember that you are either experiencing a test or a blessing and there is a reason why God is allowing you to walk through the process.

It’s to refine you.  To make you more like Him.

Don’t let criticism define you.  Despite how you’re feeling at the moment of delivery, it is only God’s opinion of you that matters.  And he thinks you’re really awesome!!

I follow the blog peacefulwife.com.  If you want to read more about this topic as it relates to marriage, she has a great post here about accepting constructive criticism from our husbands!

Merrie Beth Day is a marriage speaker in Fort Lauderdale, Florida. She learned, first hand, about the powerful influence women have to build up or tear down their homes. She went from being a foolish woman who tore down her home with her own hands to a wise woman who built it back up with God's help! The Wise Woman Builds! She and her husband Courtney have been married for over 20 years and have a teenage daughter and son.

My Heart is at Home

All things faith, home, and family

Learning to Dance with Desire

Marriage, Motherhood, and Minding what Matters Most

What to Say & How to Say It - speak up, be heard, DEEPLY CONNECT with God, yourself, & others

A higher drive wife blogs about sex and marriage